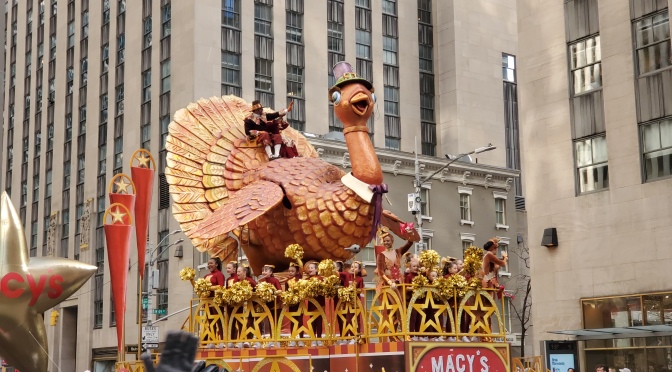 Last Thursday morning at 6:00,  Husband and I and four of our travelling companions  left our hotel on Times Square, walked down 49th St, crossed  Broadway, and made our way over to 6th Ave where we found a nice open space of sidewalk right across from Simon and Schuster Publishing  House to claim as ours for the Macy’s Thanksgiving Day Parade.  Prime areas near the corner were cordoned off, reserved for widows and orphans of police and fire fighters.

The curbside was already claimed by some intrepid souls who got there at 5:00. It was cold, but we felt warm gusts of air from the subway through grates in the sidewalk.  The teenager in our group promptly laid down on the metal grates and went to sleep until the parade started.  I kept pretty warm in my lined jacket, but it really helped when a Netflix representative handed out Green Eggs and Ham earmuffs to everyone around us.

Police patrolled on foot and bicycle, and were blocking off side streets with metal barriers. The people nearby us were from Arizona, Minnesota, and Connecticut as well as City residents.  We shared stories and took turns getting coffee and pastries as the sun rose.

The parade began many blocks north in Central Park, and got to us at about 9:30.  There had been much anxiety if the balloons would fly, as it was pretty windy, but fly they did, although closer to the ground than was typical. The were loads of clowns in charming costumes, dancers of all ages, lots of stilt walkers,  and lovely floats. Many of the participant were school aged children who looked  so happy and proud to be in the parade. I really liked the Christmas trees on stilts. 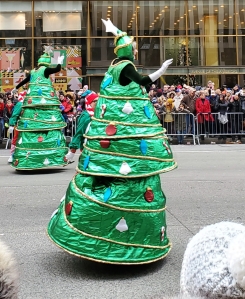 The marching bands were from all over the country.  Their chaperones and parents marched right along behind them. We had fun judging the straightness of their rows and columns.  (“Guide right!”) The biggest group was The Second Time Around Marching Band comprised of dozens of quite aged baton twirlers, pom pom wavers, and musicians in natty uniforms  who looked ecstatic to be marching again. The floats were elaborate and featured singers, TV personalities, and actors. I wasn’t very familiar with most of them, but our teenager assured me they were  quite famous

Astronaut Snoopy was the first balloon, with the Grinch and his dog, Max the last.

The parade ended for us at 11:30 with Santa on his float.  The side streets were still blocked to motor traffic, and it was fun to meander with hordes of New Yorkers  in the lanes normally full of honking cabs and cars and buses.  We all trooped back to the hotel and took naps. It had been a long, cold wait, but well worth it.

Tell some parade stories. What would you like to do in a parade?