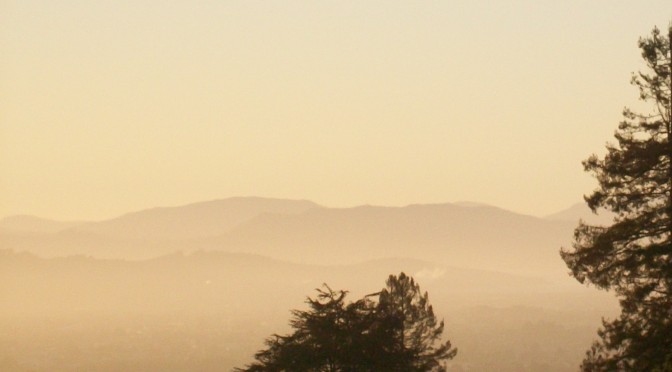 Today’s post comes from Barbara in Robbinsdale
(Written 9/28/15, in the hills of Berkeley, CA)

When I first looked out here, I could see only the house across the street. Now I can see some rooftops, but beyond that is Fog, just a blur as the houses across the street seem to drop away down the hill.  I am house-sitting in the Berkeley hills for a friend of my sister while I visit Sue in the East Bay near San Francisco. It’s a chilly morning so I’m seated with a cup of tea, inside the sliding glass door. I hear crows and traffic, so I know there is life beyond what I can see. I hope I can find my camera.

Ah, now I can make out several large pine trees farther down the hill. I know that behind them are more houses and more trees, then smaller and smaller houses as the hills level off to the “Berkeley flats”, the franchise strips like San Pablo Ave, the freeways, and finally the Berkeley Marina and San Francisco Bay. Last night it seemed that millions of lights dotted this view – this morning, Fog.

I try and remember the Carl Sandburg poem we memorized in 8th grade:

It sits looking
over harbor and city
on silent haunches
and then moves on.”

My memory takes me back to another time: In the early 1970s I spent two years living in El Granada, a tiny coastal community 45 minutes south of San Francisco on Highway 1. I’d already spent two years in S.F., so I knew a bit about Fog. When I (and my dad) bought my VW, I made sure it was the new bright yellow that would show up in the Fog. Living on that coast, I would wake up many mornings to the foghorn – that low, haunting vibration that makes you want to burrow back under the covers. But the Fog would usually “burn off” by noon, often revealing a crisp sunny day.

When I moved back to the Midwest, I seldom encountered Fog. When I did it was usually an anxious time, me creeping along in the car because I couldn’t see what was ahead of me. I realized I missed the kind of Fog that comes in morning, then bows out and lets the sun through – missed the foghorn.

I suppose we could move to Duluth.

When have you had an encounter with Fog?