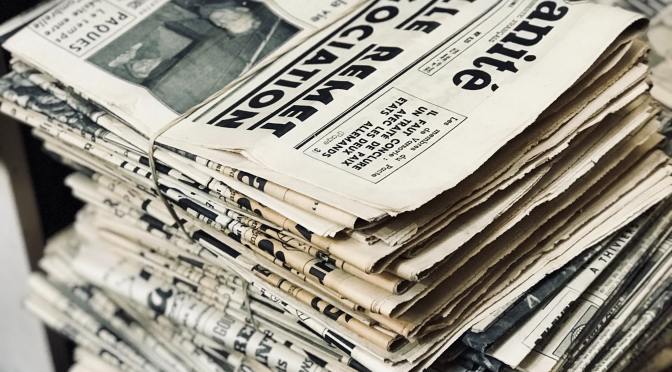 I have taken great delight, lately, in some news stories and headlines. Here are some that really caught my attention.

Woman gets Probation For Raccoon

2 year old Rescued After Being Swallowed By Hippo

And my recent favorite from the Fargo Forum about a young woman from Moorhead.

What are some notable news headlines you have noticed lately? What kind of reporter would you want to be? What stories would you like to cover?

I was delighted to read the story of the New York dentist and his wife who welcomed ten Korean tourists into their home after their van was stuck in the snow. They found beds for them, and they spent the storm cooking Korean dishes and watching football. What generous hospitality!

I figure with the Twin size air mattress and we have in the basement we could sleep nine extra people pretty comfortably. We have fourteen bed pillows and lots of sheets and blankets (Don’t ask. It is German thing) so there would be sufficient bedding. Our freezers are full, and we could certainly feed ten people for days. Being prepared for such an occurrence certainly speaks to keeping a well stocked stocked wine rack!

How many people could you accommodate in a pinch? What would you feed them? Tell of some weather bound experiences you may have had.

In the “always something new under the sun” category – I came downstairs last week to find Nimue’s two ceramic bowls replaced with these two plates.

YA purchased them because apparently kitties can get “whisker fatigue” if they eat from regular bowls. I’m not even going to look up whisker fatigue; if I do find it legitimized online, it will just make me crazy.

Any new “news” in your world lately?

We try to limit our trips to Walmart to once a month, and I hit the jackpot there last weekend.

The Redken company ceased production of a certain hair product called Thickening Lotion. I have used it for decades to lend body to my hair so it doesn’t hang in my eyes. Well, this has reportedly been a rather unpopular move nation-wide, and I am quite unhappy about it. My hair dresser is beside herself about it.

My hairdresser has tried to find an alternative for me, like this weird foam stuff that sort of works, and hairspray, which I really dislike. I looked on-line for it, and found they were selling it for $100 a bottle on ebay.

As Husband and I left Walmart Saturday I spied two bottles of my beloved hair goop on the shelves in the Walmart Beauty Salon. It was on sale for 20% off, and cost me $20.00 a bottle. I was elated! Now I am set for another 4 months of happy hair styling and clear vision.

Remember Dipity-do? What hair products have you used in the past that you would never use again? What is the most embarrassing hair style you ever had?

I don’t consider myself a trendy person although I do like to think that I at least pay attention to what’s going on in the world.

A few years ago when charcuterie, although not a new concept, became a big deal, I noted it.  I’ve never served a charcuterie board; I don’t have a good reason, just never got around to it.  (Aside: I DO have a stamp set of a board with all the normal charcuterie inclusions – meats, cheese, olives, tomatoes, etc.)

Now I see that “butter boards” are all the rage.  At first I thought butter boards were an assortment of butters, which seemed a little weird but now that I’ve read a few articles, I understand the concept.  You start with a board, spread soft butter lavishly all over it and then add various seasonings.  Salt, lemon zest, garlic, red onion, various spices, greens, even honey – you name it, there is probably already a recipe out there for it.  You serve these butter boards with bread and there are lots of opinions about that as well.

They look fun but I don’t know if I’ll get around to serving it.  In my circles I envision spending more time explaining it to people than I would eating it!

What would you like on your butter board?  Will you miss charcuterie?

I received several condolences from local people these last couple of weeks on the death of my mother. This was rather surprising, as my mother died in 2014.

There was a death notice in the local paper a couple of weeks ago for a Marilyn Boomgaarden. Well, the last name is correct, but the first name is not my mother’s, and I understand the confusion. Local folks thought she must be my mother because we have the same last name and there aren’t any other Boomgaardens in southwest ND. Marilyn was the wife of my dad’s cousin Irwin, and was briefly here in Dickinson to be close to her daughter, my third cousin. She moved here from Dell Rapids, SD.

My grandfather had eleven brothers and sisters, and if you encounter a Boomgaarden in Iowa, Minnesota, South Dakota, or North Dakota, chances are really good they are my kin, especially if their last name has two a’s in it. It is a pretty odd name, although in Ostfriesen/Dutch it means orchard. The family was fairly close knit, and cousins kept track of each other, so I heard all about all Dad’s cousins growing up. I have yet to write to the person who sent a sympathy card to me and donated three bibles to the Salvation Army in my mother’s memory. Oh, to live in a small community!

Have you ever been mistaken for someone else? Do you have any close or distant relatives who live nearby you? What does your last name mean? 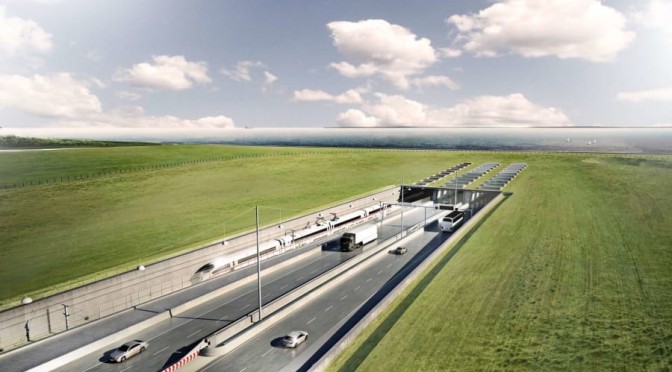 I see in the news that they are building what will be the world’s longest immersed tunnel.  Linking Germany and Denmark under the waters of the Baltic, construction actually began in 2020 and is expected to be complete by 2029

I’m sure lots of folks are excited about this but not me.  I don’t even like driving through the I94 tunnel downtown and last month when folks got stuck in The Chunnel for several hours, I almost had a panic attack just reading the news story about it.

Any phobias you’ll admit to?

Yesterday the Fargo Forum reported that bar patrons in Maddock, ND, who were in the Maddock Bar the night of September 6 needed to be aware that they may have been exposed to rabies. It seems a rather intoxicated woman came into the bar holding a racoon she had rescued days earlier from the side of the road. She was asked to leave the bar, but not before she walked all around the bar showing people her racoon. The racoon was reportedly injured when she found it, and she had nursed it back to health and was keeping it as a pet. It is illegal to keep racoons or skunks as pets here due to the threat of rabies. They are still looking for the woman and her racoon. The bar employees say they are going to dress up as racoons for Halloween,

When I was about 6 years old, I tried lifting a friend’s rather fat beagle into my father’s fishing boat that was stored along side the garage. The beagle was not amused, and bit me on my face. It was just a nip, but my mother was panicked about it. The beagle’s owners refused to lock the dog up the required number of days to see if it was rabid, so I had to have a series of rabies shots. I got the shots under my shoulder blades. It was painful. I wouldn’t want to go through that again. The beagle wasn’t rabid, by the way, and he and I remained friends.

Know any good bar jokes? What animals would you like to see in bars? What are your experiences with rabies or rabies shots?

Boris Johnson resigned?  When the heck did that happen?

I know I’m not thrilled reading the news these days but I do check in every few days.  Yesterday I saw a couple of things on Facebook that drove me to CNN.  Lots of news about the Prime Minister Shinzo Abe’s assassination but nothing about Boris.  So I thought I’d check out BBC.com.  Absolutely nothing.  Thinking it was a fool’s errand, I just typed “Boris Johnson” into Google and finally found the news.  Seems as if four days later, it isn’t a headline any longer.  Like you shouldn’t blink or you’ll miss big chunks of what’s happening in the world.

The year after I graduated from high school, I spent 8 weeks living with a family in Mexico (their 2 daughters had spent the summer with us the year before).  Back then – yes, when dinosaurs roamed the planet – no BBC.com, no CNN.com, no streaming.  Just the daily newspaper, which in that corner of Mexico really did not carry any international news at all.  I felt a little cut off from the rest of the world while I was there – I’m assuming it’s how those bio-dome folks must have felt.

I came home from Mexico on a bus through Nogales to Albuquerque – stayed in a hotel one night and then flew home the next day.  That morning in Albuquerque I took a long walk and before returning to the hotel, I stopped at the corner drugstore and bought copies of several news magazines (Time, US News & World Report, Newsweek, even the Atlantic Monthly).

Apparently while I was in Mexico, there was a problem between Greece, Turkey and Cyprus.  Despite having the top news magazines of the day in my hands, I couldn’t really figure out what had happened.  If you don’t read the first news stories, it’s hard to “catch up”.  To this day, I’m not really 100% sure exactly how it all played out although I know that Cyprus is divided by a Green Line with the Greeks in the south and the Turkish in the north.

I’m a little worried that this is how it will be for me and Boris Johnson.  I’ve found a few op eds and I THINK I’ve got it down, but am still a little surprised at how fast the story came and then went!

Anything gone missing in your world this week?

Saw a news story yesterday about a Tesla flying into a building.  Watch until the end, because the last camera’s viewpoint is fascinating.

Of course, I assumed it was a Tesla that was driving itself.  Imagine sitting back in your Tesla, kind of paying attention and suddenly you are crashing into a building.  Turns out that it was a guy driving; he said he lost control.  Witnesses suggested he had sped up to make a light before the car took wing.  So the story isn’t as fun as a Tesla auto-piloting it’s way into a building – not sure what that says about me.

I’m thinking the driver was incredibly lucky – his entry point into the building was the glass window and door entry way; if he had sailed into some other part of the building at that speed, I wouldn’t be writing this story because the poor guy would likely be pushing up daisies.

When was the last time you flew anywhere?  Any flights coming up?