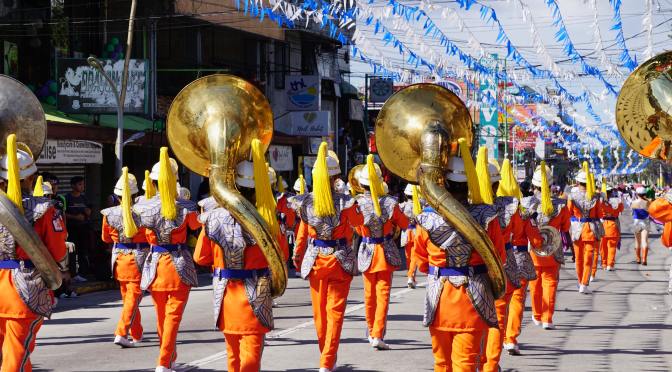 I believe every little town in the land has some kind of summer weekend festival/carnival. The Twin Cities’ one grew into the Aquatennial. Winona calls theirs Steamboat Days, and it happened this past weekend.

Husband and I pretty much steer clear of the crowds and the midway at this point, partly because our bodies no longer enjoys things like the Tilt-a-whirl. But there are a couple of things I like to do:

– the Vintage Car Show – 3 blocks of downtown cordoned off, for a walk down memory lane. (Click on link for actual colorful photo…)

The Parade at noon on Sunday is kind of a big deal – I think it’s the only city-wide parade all year. People start staking out their territory on Saturday, cordoning off their turf or setting out awnings, blankets, and lawn chairs. I got there right at noon, expecting to just stand, but was able to sit on an unoccupied stair step for a while – Husband came later.

There was an enterprising guy with a wagon stuffed with bags of kettle corn for $6. . There were Clydesdale horses, a collection of colorful Jeeps, and a person on stilts.

Winona’s Clown Club gave the Shriners some competition, and there was a group of little dancers from a local ballet studio that stole the show for a while there.

Winona’s own Little Warriors Drum Corps brought up the rear – they are amazing when they are in there element, many ages and cultures of kids who have found a place to showcase their talent. (Wish you could see the littlest guy better.)

When was the last time you watched a parade, or attended a summer festival?

Where else have you been able to gather where there are people of all ages, and from all walks of life?