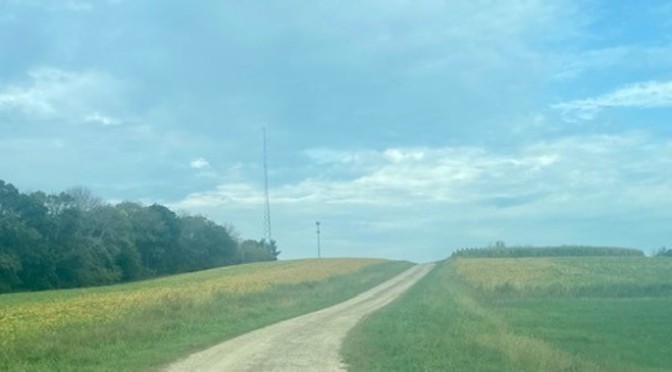 The weekend Farm Report comes to us from Ben.

Our two ducklings are doing well. Kelly has named them Rosencrantz and Guildenstern. Rosie and Guildy for short. They seem to be afraid of everything. Mostly they spend the day hiding. But considering they’ve lost seven of their siblings, and the whole animal ‘fight or flight’ mentality, maybe they’re the smart ones and that’s why they’ve survived this long. And they just learned to walk up the board ramp to go in at night on their own, so that’s pretty smart of them! No more trying to wrangle them in at night. Now we’re trying to see if they’ll come out on their own in the morning so we don’t have to chase them out.

The other morning I watched a hawk swoop right down over the pen and then sit in a nearby tree. R & G weren’t out yet, but that might explain why some of their siblings disappeared. A few minutes later, when I was in the shed letting them out, a brown chicken hopped down out of the rafters right in front of me. Scared the bejezzus out of me. (By the way, when I dictated “bejezzus“ into my phone, it translated as “big Jesus” and I thought well, that works too). It scared the big Jesus out of me.

Still not much happening on the farm, beans are turning yellow, corn is drying up. I’m keeping busy with more summer projects at one theater and working on our fall show at the college. Sure has felt good to put on my toolbelt  again. Man, am I out of practice. Doesn’t take much to wear me out. Course I haven’t really done much this whole calendar year. Building up my endurance. I did haul a 50 lb bag of chicken feed over to the chickens and dump it in the wall feeder. And put two bags of water softener salt in. Progress!

I’ve spent a lot of time sitting on the garage steps just watching our little corner of the world. It’s nice.

Our apples and pear trees are overloaded this year. In fact they are so overloaded they broke a few branches on the apple tree. Yeah, it needs to be pruned. I think they’re Harrelson‘s. They sure are good anyway.

Who knows anything about Minnesota pears? I think they were called golden? They’re small, and green and only get to be slightly larger than a ping-pong ball, and really hard and they do not taste good. Do they ever get better? What do I need to be doing with them?

Kelly and I froze some sweetcorn last weekend. Only four dozen; daughter helped me husk it, and then I cut it off the cobs and Kelly bagged. I remember doing that with my parents, and for a few years my sister would come out to help me and Kelly. It’s a fond memory I have with mom and dad.

WHAT DO YOU WEAR TO FEEL GOOD?