There’s a fresh kerfuffle over an imagined proposal to use Neanderthal DNA to produce a clone of our prehistoric cousins. 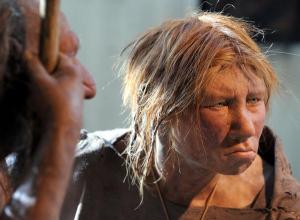 The professor who supposedly made the suggestion claims his comments were poorly translated and misunderstood. Ethicists say it’s a bad idea in any case.

No one is enthusiastic about the concept of bringing back to life some distant relatives who might have been boyfriend/girlfriend material for early humans in the unregulated, romantic days of yore.

Yes, everybody’s against cloning the Neanderthals, though I’m guessing the songwriters would see some intriguing possibilities in the adventurous sexual dynamic that could develop. Imagine, if human / neanderthal dating had been a possibility when The Beatles wrote this:

I’ve just seen a face,
that was extinct. With hairy grace
I think she winked. She’s a Neanderthal
but I don’t think my folks will care at all.
Na na na na na na

CHORUS:
Cloning. Let’s do some cloning.
Start Twilight Zoning them back again.

I love every ridge
of her thick skull. Her name is Midge.
She’s never dull. A prehistoric Miss
My human heart, each time we kiss, is full.
Na na na na na na.

Yes I’d like a chance
To take a fossil to the dance
It’s not impossible to clone a date
No love affair has come as late as this.
Na na na na na na.

Who was your least (or most) compatible date?