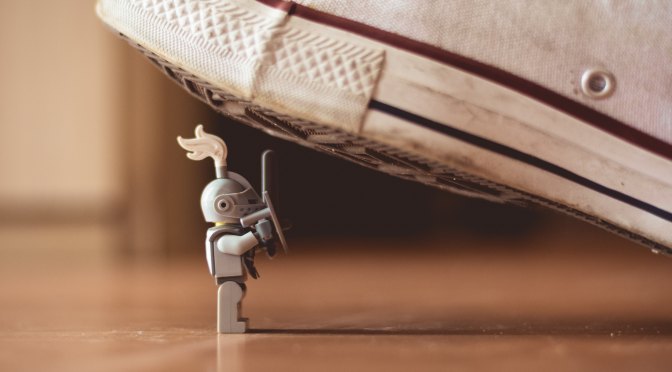 Tonight, I lost the battle. I’m defeated. I give up. For one month, I’ve kept my two kittens blockaded in the bedroom.  I have a big door on one side; no door on the other.  Because I felt they should only be kept in one room for a while, I moved a big bench to close off the opening without a door and nailed in a throw a few inches higher than the bench to fool them into thinking there was no way out. 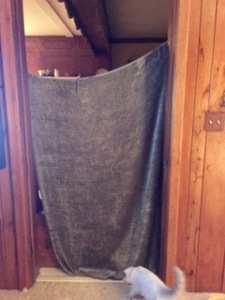 This worked for a while, then “Trouble” found a way over it, so I nailed the blanket half a foot higher. That worked for a while until tonight when I nailed the blanket up so high that only one foot was still exposed. Trouble climbed over it in seconds, even though I repeatedly squirted him with a water bottle. He’d dart off, then return to finish his task of penetrating the barrier to full freedom in seconds. He didn’t care that I yelled “NO” or that I’d pick him up and toss him back in the room or that I squirted him.  He had no respect or fear at all.

That’s it: they’re both on the loose, terrorizing my old cat upstairs and doing anything that their feline instincts lead them to. I’m defeated. The vet was right about this male Ragdoll and now I’m under their control. Poor old Izzy, whose world was upended a few weeks ago. In just one week, she lost her only friend, Peanut, then was scared into the dungeon below the cottage for days. A few days later, I brought the kittens home, so she lost having me in the bedroom she’d always come into for affection. She spotted the kittens for the first time only two days ago, and spent hours hiding in the bedroom upstairs. Her only comfort in life has been having me, out of guilt, going upstairs to sleep with her every night after the kittens were safely closed in the downstairs bedroom. Now, she’s lost even that.

Now, Trouble, followed by his copycat sister, has claimed the entire cottage as his territory. I’m struggling right now with feeling owned rather than owning these pesky fur balls.

What is the best way to turn defeat into something postive? When have animals or people got the best of you?