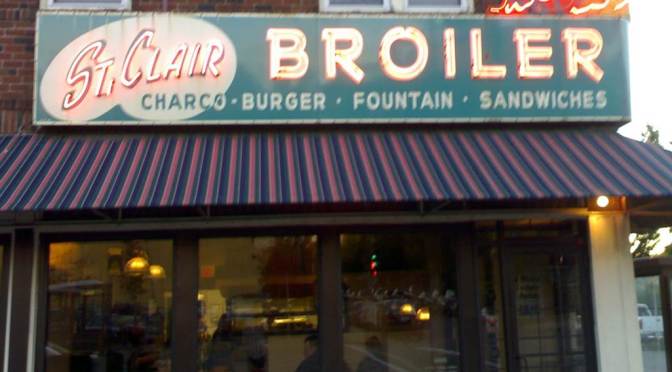 Two iconic restaurants in St. Paul will be closed by the end of this week. This saddens me, because I love a good neighborhood restaurant, and hate to see them replaced by the chains or the glitz that seems to accompany so many newer restaurants. (Even although I’ve never lived in St. Paul, these two were well enough known that I had made my way there all the way from Robbinsdale.)

The St. Clair Broiler, a burger and malt place (visited by Al Gore), closed at the end of September after 60 years in business. Back in the late 70s, we used to meet a St. Paul friend for a burger at the Broiler, followed by a movie in a theater on the same block, if memory serves. A St. Paul Pioneer Press article  reads: “With the recent boom in neighborhood restaurants, staying competitive has been a concern for the Broiler, which underwent an extensive menu change and decor refresh in 2015 in the hopes of attracting some younger customers. Apparently, the gamble didn’t pay off, as the restaurant was no longer profitable…”

And it breaks my heart that Muffuletta is closing this weekend, Nov. 11 being its last day after a run of 40 years. A European style bistro, its wonderful outdoor patio was a huge draw in the mild months of the year, and the indoor space was cozy in the winter. If I could, I would drive up for one last brunch with a friend (including a nice glass of wine), followed by shopping at Bibelot and a tour through Micawbers Bookstore, both on the same Como Avenue corner. Apparently upcoming street construction is a factor, but even this icon hasn’t been a money maker for some years. Sigh.

What are some of your favorite places that are no longer with us?