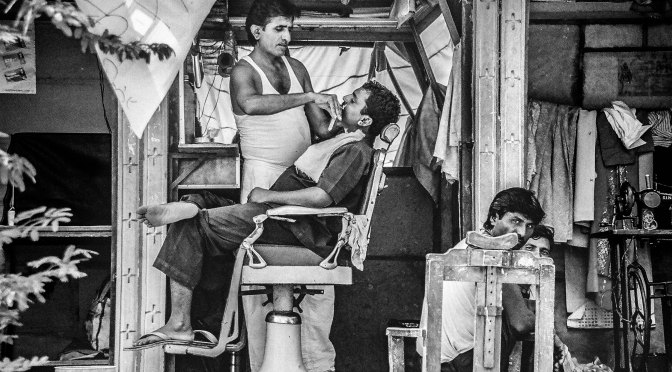 This past week everyone in our house was groomed and  brought up to snuff, starting with the cats. Our short-haired tabby looks about an inch smaller in diameter since we took the furminator to her on Saturday. The birds have scads of grey hair to line their nests now. Our long-haired tortie has really furry back legs that make her look like she is wearing fuzzy pants.  She gets a slicker brush.  “It’s time to brush your britches” we tell her.  She isn’t real impressed with the procedure.

Husband’s barber moved to a new and improved space with four barber chairs,  a coffee bar, and beer parlour.  The barber is a devout Catholic who named his new shop after St. Martin de Porres, an influential New World priest during the 1500’s and 1600’s in Peru who is the patron saint of mixed-race people, barbers, innkeepers, public health workers, and all those seeking racial harmony.  Husband has curly hair and is fussy how his hair gets cut. He is happy with his barber. He had neither beer nor coffee during his hair cut.

How would you define your relationship with your barber or hair dresser. How have your animals taken to being groomed?

57 thoughts on “Brush Your Britches”