A month ago there appeared on our patio a piece of rusted metal, a found-art sculpture.  But I was onto Kevin. I had seen it beside his truck in the garage. He had found it beside the recycle bin in the winter and kept it to put on our patio in the spring.

It was bare rusty metal, re-rod, gears, metal plate, and barbed wire. But I did not acknowledge its presence. Instead I went out and bought some spray paint, green and red. And yellow. He thought it was a lemon. I tried to turn it into lemonade.

Now he wants it back to take home. We assume a student had done it for a class and trashed it.

Then this morning he called me out. He has permission to come to the window beside my computer and talk to me. He saw five cecropia moths on the south end of the building. He brought one and put it on our patio table. 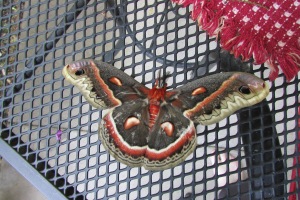 It hatches, mates, lays its eggs, and dies in only a couple days or so. Thus, rare to see. It is six inches across. Comes from those big fat green worms.  Here is one with a belly full of eggs.

After a neighbor had come to see, and Kevin’s wife came too, charming woman, I took my coffee out and watched. Its wing flapping slowly. It rolled on its side, kicked its legs in spasmodic jerks, and lay still. I sighed for it. Then it up and flew off into the woods.

Where have you found beauty, expected and unexpected? How has life surprised you?

21 thoughts on “Kevin’s Lemon into Lemonade”