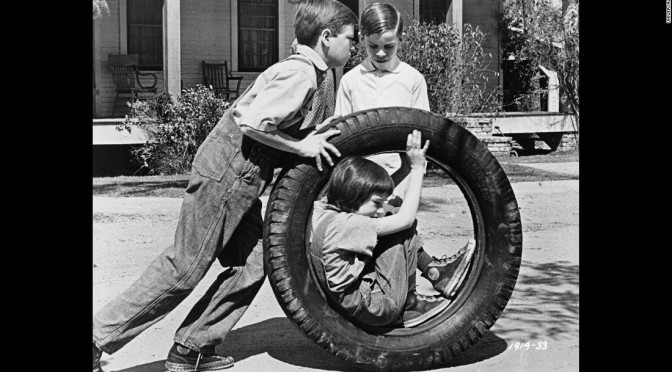 Today’s post comes to use from Steve.  Photo credit:  CNN.com

I fell in love with movies when I was a kid. Every Saturday I’d walk six blocks to the Capitol Theater, a dime and a nickel in my jeans pocket. The dime bought a ticket good for two movies, usually two cowboy movies or two Tarzans. The nickel got me a box of Mason Dots. When empty, the Dots box functioned as a rude sort of horn so I could signal my disgust when a cowboy hero smooched his girl.

In 1953 our family got a television set so we could watch the coronation of Queen Elizabeth II. We went on to fulfill that classic Fifties cliché: we bought TV trays so we could eat TV Dinners while watching TV shows. But nobody in our family cared much for television. The programming back then was limited and lame. I much preferred movies.

I saw several wonderful films in the years just before and after graduating from high school. A short list from that time would include: The Apartment, Tunes of Glory, Lolita, Wild Strawberries, Bridge Over the River Kwai, Seven Samurai, The African Queen, Breakfast at Tiffany’s, To Kill a Mockingbird, Wild River, The Miracle Worker and Tom Jones. Those movies convinced me film-making at its best can work wonders.

Decades later I mostly gave up going to movie theaters because by then I had a superb home theater in my basement. I compiled a library of films on tape or DVD disks. In the 1980s movie rental shops suddenly sprouted like mushrooms after a rain. I welcomed them because I loved watching films in the comfort of my own home. At the checkout counter at Blockbuster a clerk once mused, “You’re a good customer. You’ve rented over 200 films from us this year.” I gulped. Blockbuster was one of three rental shops I was using that year.

All of that has changed. I now struggle to find one film a week worth viewing. In the past I waited impatiently for each week’s new rental offerings. When I joined Netflix I had nearly two dozen films on my queue. Today my queue has only three movies, and my expectations are low for two of them. The irony of this is that I have more free time now than at any time in my life, and yet I struggle to find films worth watching. I wonder how things came to this.

Perhaps watching several hundred movies has spoiled me. After seeing so many films they begin to look the same. Plots become formulaic. Dialogue becomes predictable. As a writer I can see how film writers manipulate plot lines and character to produce crises that feel phony or forced. Actors who once seemed fresh can become boring after you’ve seen them in similar roles several times. Maybe I’m jaded.

Or maybe Hollywood has mostly stopped making films that could interest me. I want to blame Star Wars. Ever since Star Wars rewarded its makers with incredible ticket sales, movie companies have struggled to produce a few incredibly expensive movies. It now costs between 200 and 300 million dollars to make a summer hit film. Production houses concentrate on films that appeal to teen boys, including teen boys all around the world. And movies seem obsessed with zombies, spacemen, dinosaurs and superheroes. Any good idea for a movie is sure to be franchised . . . and quite a few bad ideas, too.

Last week I read an article celebrating “the new canon,” the twenty-three best films made since 2000. I hoped the article would point to promising new films for me. Instead, the list was filled with films I had seen and didn’t enjoy. Most film on the list struck me as bleak, cynical and violent. I was startled by how differently the author of that article and I felt about these films. For him they were modern cinematic classics. For me most of the new classics were unacceptably gloomy and ugly.

In spite of efforts to avoid gory movies, I sometimes goof. A positive review caused me to rent a film called John Wick. I’ve never seen anything so bloody. Wick kills 77 people. Of course, there will be a sequel. I just read that the body count in John Wick 2 is 128, which is just what I would have predicted. Any guesses on the body count for John Wick 3?

Has your taste in films evolved over time? Do you have any favorites to recommend?

46 thoughts on “Me and the Movies”