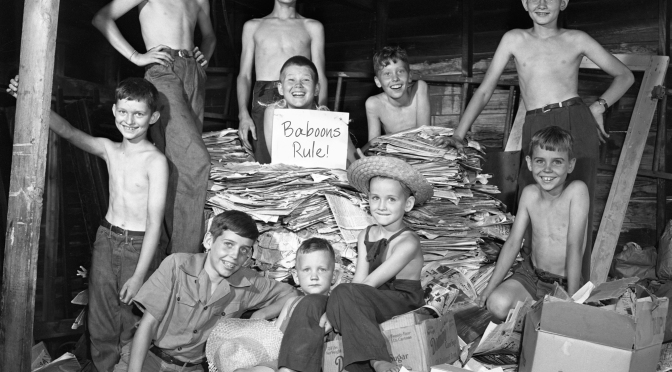 Here’s a stream of consciousness for you:

Today I bought a roll of sisal twine to have on hand when I bundle tree trimmings or flattened cardboard boxes for recycling and I reflected that sisal twine always makes me think of paper drives. Remember paper drives? When I was in grade school and when I was in Boy Scouts, paper drives were a common way of earning money for extra-budgetary purchases. I especially remember the  school ones. We would each be given some lengths of twine and then, singly or in groups we would pull a wagon around the neighborhood asking neighbors, door to door, if they had any stacks of old newspapers we could have. There must have been a competitive aspect to it but I can’t remember specifically how it was set up. I don’t think it was individual; more likely it was grade against grade to see who could collect the most. I don’t recall a reward for winning either, other than the pride of coming in first. Paper drives have gone away because recycling has reduced the value of scrap paper and nobody has stacks of old newspapers lying around anyway.

It seems like there were a lot of fundraising schemes back then, most of which involved going door to door and trying to sell some commonplace item, like light bulbs, at an inflated price. An easy albeit unimaginative solution for some group of PTA parents to foist upon hapless students as a means to raise funds. Presumably, your native charm and powers of persuasion were supposed to compensate for the poor value of the transaction. Usually what happened is that your parents and grandparents ended up with a stockpile of off-brand light bulbs they had purchased at a non-competitive price. The only party to the scheme that made any real money was the company that supplied the fundraising products.

Door-to-door sales is almost extinct, it seems. Gone are the Fuller Brush men and I can’t remember the last time a kid came around trying to sell something. Although I imagine that would be considered child endangerment these days, most of us had some experience with that kind of commerce. I briefly considered trying to sell waterless cookware when I was in college. I had picked up the sample case and tried out my spiel on some female friends. I was so inept and so unconvincing that they were in helpless tears of hilarity before I finished. I returned the sample case the next day.

How about you? What did you sell?