WELL, I guess we’ve finally got our snow, at least here in Minnesota. I remember, at the end of that December-January dry spell saying “Oh, we really need some snow or there will be a drought come April, when there’s supposed to be a thaw.” Watch what you ask for – request was granted!

It was so pretty that I took some photos, and Ben sent a few taken from his driveway. A friend of mine has allowed me to post one she took on her patio, that is quite naturally dubbed The Birthday Cake. 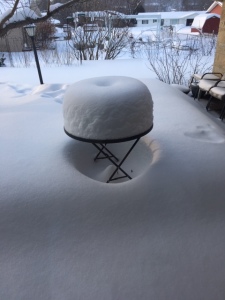 There will no doubt be more snow – heck, we’re not even through February!

What’s the longest you’ve been snowed in somewhere – where you really couldn’t get out?

What’s a great “snowed-in” story from a movie or book?