My nephew turned 40 over the weekend. He has had challenges throughout many of those years, including struggling with addictions. He has been sober for a number of years and is doing well now, but is ever vigilant not to slip back down that slippery slope. Forty is a milestone and he invited family and friends to a gathering to help him usher in the new decade. The invitation and his situation, brought to mind an episode and an item from the family canon that I thought would be meaningful to him and support both his sobriety and his interest in family history. My problem was that the story really started in the late 1800s and the chain of custody of the actual facts has more missing links than the other kind. Here is the story I was able to cobble together from the collective memories of my mother, brother, sister and me, and present to my nephew:

We thought that you were the perfect person to hand down this family heirloom and story to. Although the people who could give us the most accurate information are no longer available to confirm or refute these “facts”, here is what might have happened that we have pieced together from the memories of those of us were around for parts of this saga. Total historical accuracy is not what you’ll read here, this is the new truth from the 21st century onward…

Long, long ago, when your great grandma, was a young girl, a man in the family (quite possibly her father, but maybe not) regularly drank more than was prudent. Each day (or possibly more or, less often) he would send one of his 3 sons, (if indeed it was Grandma’s father) to a neighborhood bar to have this brown pitcher filled with beer, and returned to quench his thirst. Grandma developed a loathing for what excessive drink could do to a man.

At some point, when he was old enough to know better (in his 40s), her son, your dad’s, aunt’s,  and my father, did one of 2 things. Or, more probably, he did both and one was the straw that broke the camel’s (Grandma’s) back.

Scenario One: He drank too much at his favorite bar, headed home, driving drunk on back roads, and was pulled over by the police and given either a DUI ticket or a warning. Somehow Grandma found out about it (back then all legal infractions were published in the local newspapers, so she may have read it, if indeed he got the ticket). In any case Grandma knew and she was furious with him.

Scenario Two: He arrived at a family gathering in a state of intoxication, which his mother quickly recognized, and she was furious with him.

Whatever the infraction/(s) was/were, at some point, still furious, his mother presented the family symbol of excessive drink, the brown beer pitcher, to her son as a stern reminder of her fury and disapproval of his lack of sobriety. It was also, of course a loving reminder of her parental devotion, and concern for his welfare. We are all quite certain that his mother never, ever saw him drunk again (which is not to say that he was never drunk again, just not in her presence).

So, with pride and recognition of your years of sobriety, and to commemorate your fortieth birthday, we present you with that same little brown jug, which is now the family symbol of keeping the plug in the jug.

You have become the keeper of the story and the jug, and you may use, alter, enhance, embellish, retell, hide, proclaim, ignore, or do anything else with them you wish.

Author’s note: I have thoroughly examined the pitcher for any identifying marks and found nothing etched, stamped or printed anywhere on it to help identify where or when it began. It is fairly small, about 7 inches high. Notice that the handle appears to be a greyhound. What’s up with that? In any case, if the back story is at all accurate, we assume that the pitcher is at least as old as my grandmother would be; she was born in 1890, so nearly 130 years, but it could be older. 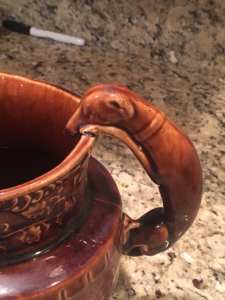 61 thoughts on “The Family Escutcheon”