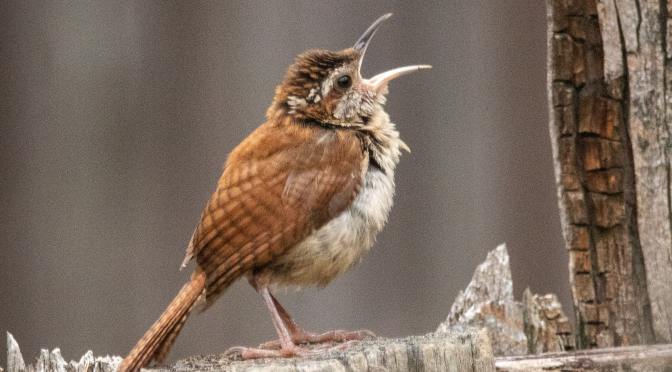 One of the projects I have been putting off way too long, and finally got to this summer, was to re-roof an old birdhouse I’d gotten from one of my gardening clients. It’s a very old weathered wood house that had been chewed on by a critter of some sort, and I had put it aside when the old roof fell apart.

I rounded up the wood scraps, saw, hammer, nails, ruler and pencil necessary to play Norm Abram for an hour, and hung the completed project on a panel of the old gazebo out back.

I felt rather pleased to be able to check it off my to-do list, but even more pleased when two days later I spotted some nesting material poking out of the opening.

After consulting a local wild bird store, I invested in some live mealworms to help provide a steady food supply for the parents and the offspring that were likely to follow soon. One of the parent birds became quite bold when s/he realized what I was delivering, and would come perch on the feeder while I sprinkled the mealworms from the container. The birds became a bit shy when I tried to film them, but I captured a few short videos of feeding time.

The activity intensified when the little ones hatched out. They were hungry, and talked about it a lot. The bold little wren actually brushed a wing against my hand one morning in its eagerness to get breakfast started. I was a little concerned that it was becoming too tame for its own good!

Do you cut corners on safety when you’re in a hurry? Do you worry about your family and friends who do?