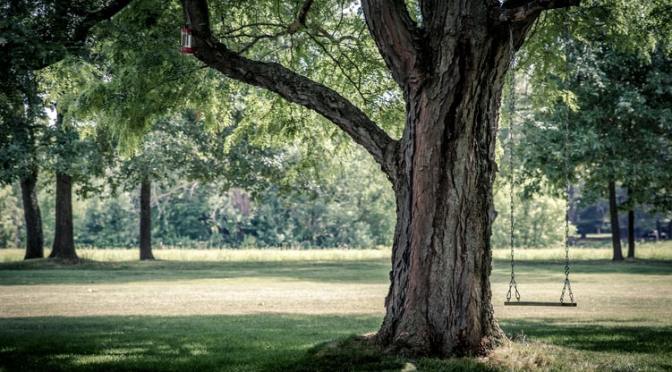 While walking yesterday, I passed by two boys playing on a tree swing in their front yard – a big yard on a corner.  One boy would sit on the swing, pull it back and then both boys would yell “Three, Two, One”.  Then the first boy would push off in a big arc and the second boy would try to hit him with a large rubber ball.  I guess the countdown was to try to even the odds… hitting the swinging boy looked nigh on impossible.  I pretended to do a doggie clean up so I could watch them a little while longer.  They were about 10 and having a terrific time.

I know that most of us remember playing like this as kids.  One of the games that we neighborhood kids made up when I was in third/fourth grade was called “Dragoons” (yes, spelled the way we pronounced it – no memory of how we came up with this name).  As horrifying as it sounds to my adult ears, we played this after the sun went down in the summer; as soon as we saw a car approaching, we would dart across the street.  If the car lights actually illuminated you, then you had been “dragooned” and had to sit out for a bit.   It wasn’t really a game of chicken, because you were supposed to be well clear of the lights — it probably wasn’t as dangerous as it sounds although I’m pretty sure I never told my mother we were doing this.  I don’t remember any close calls that summer and truth be told, it wasn’t a busy street.

Do you recall a favorite childhood game?  Anything you made up?