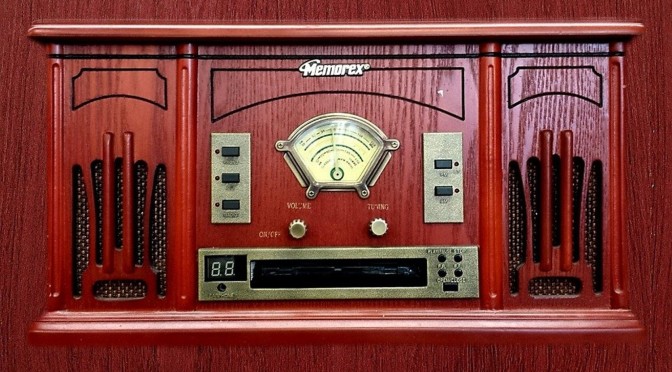 I often think about the impact radio has had on my life. We all are shaped by different influences, but radio has been a major presence in my life.

When I was a kid, we had just one radio in our home. It was a gorgeous cherrywood console that graced our living room. Listening to it was often a family activity.

Then radios became less expensive and smaller, enough so that I had a radio of my own. That meant I could choose the music I heard, a major step in my personal growth. I’ll never forget that winter night in 1956 when I first heard Elvis sing Heartbreak Hotel. I was blown away by the angst it expressed, and from that moment on my taste in music diverged from the taste of my parents. I became a great fan of Top Forty pop music, something I listened to on a small Bakelite AM radio in my bedroom. Later the popular life was revolutionized by the availability of inexpensive, portable transistor radios.

When I began grad school, there was a radio station called WLOL broadcasting classical music. I planned my whole day around that station’s schedule. When Bill Kling launched KSJN as a classical music station in the Twin Cities, I became a listener on the first day it hit the air. That classical station had a weird eclectic show in the morning, weird because the host, Garrison Keillor, played an idiosyncratic hodgepodge of country, folk and world music. I was hooked. Keillor later began chatting with his studio engineer, Tom Keith, and I became fanatical about the show. It was the way I started my day, and that remained true when Dale Connelly became the host and whimsical voice of The Morning Show.

The only firm, fixed point in our family’s week was listening to Prairie Home Companion on Saturday nights. We made no plans that conflicted with that broadcast. My daughter grew up thinking of Garrison as something like a family member, a windy storyteller like her dad. She expected her birthday to be hailed by Dale and Tom.

When I joined an online dating service following my divorce I had to define myself so women could judge whether they were interested in talking to me. My personal description mentioned books and outdoor recreation and other activities, but I always felt the most concise and useful identifier was the three words identifying me as a “public radio guy.”

What memories do you have of radio? What has radio meant in your life?