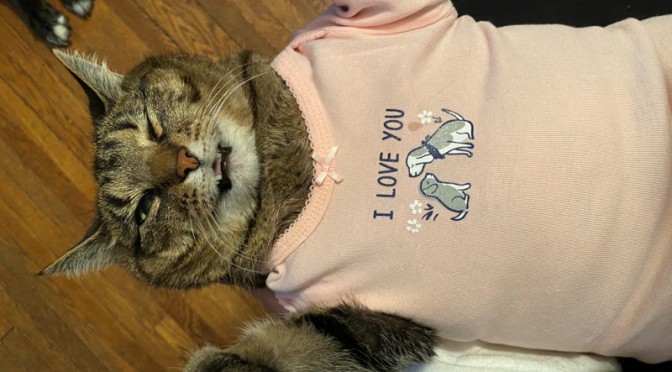 We have a mad kitty again.

We noticed that she had a lump on her chest last weekend.  Since she had a fatty tumor last year that required surgery and some serious recuperation and a real notch out of my wallet, we were worried.  I made the vet appointment and then checked on the lump every day.  It seemed more fluid filled and it turned out to be a hematoma – the skin gets pulled away from the muscle and the body tries to fix it by filling it up with fluid.

It’s a fairly easy fix if your kitty isn’t mad.  These days you sit in your car in the parking lot while the vet deals with your animal.  They call you on the phone to let you know what’s going on and what they recommend.  When they called me, they said that Nimue was unhappy and uncooperative.  She’s gotten more uncooperative over the years; she used to be a sweet little thing but I guess some of her vet experiences have made her decide she’s not crazy about being there.  They said they would need to sedate her in order to give her a little tummy shave and to drain the hematoma.  I ok’d this and about 50 minutes later, they called me again to give me the final update along with after-care recommendations, which included putting a shirt on her (if possible) to keep the incision site clean for 24 hours.  They said they had given her a little bit of sedative reversal, she would be coming around soon and they brought her out to me in her carrier.

Well, it’s easy to put a shirt (borrowed from the neighbors) and an unconscious cat.  It took her a LONG time to come out of her sedation – I was very relieved when she started to blink and she continued to be really zonked out for most of the night.  By this morning, she was awake and moving about but NOT happy about the shirt.  We ended up taking it off at about noon but she’s still a little crabby.  Treats are OK but not much scritching or cuddling is allowed for now.  Hopefully she’ll be back to her happier self soon.

Do you ever sleep too long?  Does it make YOU crabby?