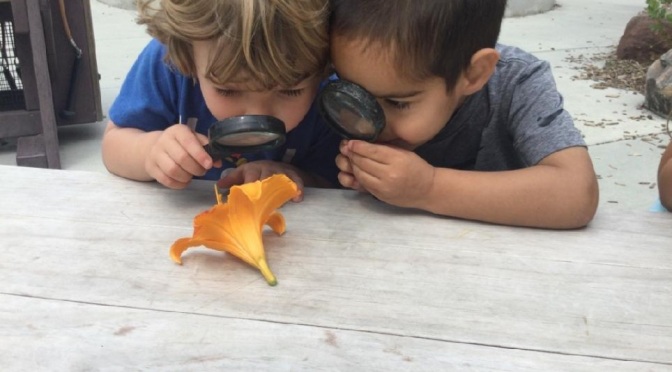 Last Thursday in the late afternoon, Husband and I went to our church to water the vegetables that we and others have been growing there. All the produce is taken to the local food pantry. The veggies are grown in six, 3 ft. high raised beds that you can see below. The rest of the garden is taken up with flowers and shrubs, with walk ways and benches for rest and contemplation.

Thursday, everything looked good. There were six nice cantaloupes about the size of soccer balls but still needing to ripen. The squash bed had one hill of bush butternut squash with four nice but still ripening fruits. We had reseeded in the carrot and beet bed as well as the sugar snap pea bed after harvesting the first crops, and all those had germinated and were growing well.

Husband went back to the garden on Friday, and texted me at work to say that half of the cantaloupes were missing. I am sorry to say that when I got to the garden after work, the Lord’s name was taken in vain and a tool was thrown down in anger as we discovered that three of the butternuts were gone as well. You can see the remaining ones.

Nothing else was missing or damaged. I covered the cantaloupe bed with bird netting and stapled it onto the wooden bed so that it would be more difficult to abscond with the remaining melons. Then, we started to hypothesize.

The incident occurred Thursday night. It would be a lot for one person on foot to carry all the melons and squash, so we figured it was either more than one person on foot, or perhaps one or more persons in a vehicle. We drove around the surrounding streets and didn’t find the produce smashed.

Husband wondered if the fact that they didn’t take any cucumbers or green beans, both of which take time to pick, spoke to urgency, which to him suggested possible amphetamine addiction. It was also presumably dark, so that the beans and cucumbers would be harder to see. I wondered if they knew little of gardening, as they took produce that wasn’t ripe. We have two Little Free Pantries on the edge of the garden, I wondered if people availing themselves of the food there thought that the produce was for all to take. We continue to speculate.

We had beets and carrots disappear in the night at times this summer. They were ready to harvest. My reaction to that was “Bless you. You need it more than we do”. I think the reason this recent event made me so angry is that the melons and squash weren’t ripe, and so they were wasted. As James Crockett comments in his Crockett’s Victory Garden, there is no remedy for finger blight.

What have you investigated recently or in the past? What kind of detective work would you like to do? Who is your favorite literary detective?