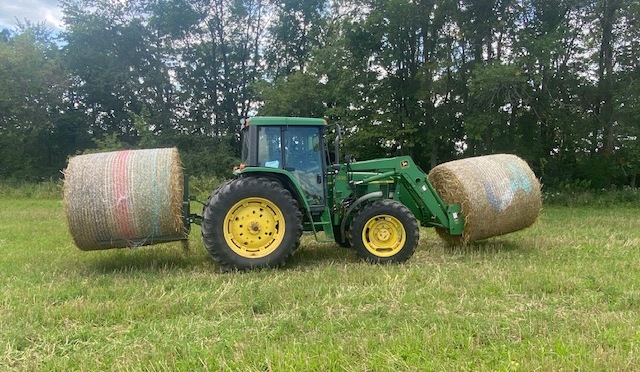 Typically, there isn’t a lot going on in August once the oats and straw is done. One year it rained a lot and oats was late and straw kept getting delayed and I was still doing straw in September and that just made me grumpy. But usually, August is a pretty quiet month.

College classes started so I’ve got homework again. ‘MN Rocks and Waters’. This first week is plate tectonics and continental drift. It’s interesting but there sure are a lot of terms and I hope I don’t have to memorize all of them.

I’ve been picking some corn ears, looking at plant health, and monitoring progress. The plant looks pretty good; not seeing any fungal diseases (which wouldn’t be expected in a dry year like this) Some ears look better than other ears.

Most have above average girth counting 16 or 18 around (it will always an even number) and length varies. Good ones count 42 kernels long. Shorter ones count 30. There are ways to estimate final yield by doing the math. We’ll see. I won’t bore you with the details. It doesn’t take into account how many deer are out there anyway.

Soybeans are looking OK too. Starting to turn yellow (meaning maturing) and it’s interesting you don’t hear so much about estimating soybean yield. Not a perfect science perhaps.

The ducks have learned to spend the day outside and go back in at night. It’s still wet inside their pen no matter how often I clean it. It’s the end of the pen where the water is, they’re just sloppy drinkers.  Kelly and I were talking that we don’t remember if they’re always this skittish. There is a breed called ‘Indian Runners’ and they’re always totally crazy. But I just don’t remember if these breeds are usually so nervous. Maybe it’s the mallards? Maybe in another month they’ll mellow out a bit. After all, they’re just barely a month old. It’s impressive how fast they grow.

I gathered up all the round bales of straw and put them in a line. Just so they’re not scattered all over the fields and to make it easier for the guys to pick up later.

If there was alfalfa hay growing under the oats it would be important to move them as soon as possible so as not to kill the alfalfa. But in this case, I’ll be digging up the field in another week or two simply to control weeds. And since I don’t know when they’ll pick them up, this may be a snow fence too.

I got parts for the grain drill that I want to get put back on this fall. And some new parts for the corn planter I could be working on.

My mom is adjusting to her room in the Long Term Care area. One day she said the bad was outweighing the good. But she says good things about the staff, and she gets ice cream every day, and yesterday she said she’s almost ready to call it home.

With rain predicted for the next few days I cleaned gutters out this morning. One was more involved than expected; it wasn’t just cleaning the leaves out from the top; it was pulling off an extension under the deck and snaking a hose up in there to flush it out.

Do you wear any rings? What is/was your wedding ring like?