For the first time in several years I took a vacation that lasted more than three days. I renewed my passport and flew to a country I had never been to before, in a part of the world I had never been to either: Leon, Nicaragua. While still technically in the Northern Hemisphere, it sure felt far South to this Minnesota girl. It was hot. Humid and hot. And wonderful. Would I go back again if given a chance? You bet. I missed the entire Atlantic side of the country. And Leon, the city and state where I spent the bulk of my time, is worth a second trip. There are places I want to revisit and explore more of, history to be absorbed (more on that in another post), and more tasty little mamon chinos that need to be eaten.

There is one part of the trip I do not need to repeat. It was great to have done it once, but once was enough: climbing the volcano.

Nicaragua is divided by a mountain range, which includes a string of active volcanoes. One of the volcanoes has its natural steam harnessed for energy. And one you can climb. If you’re foolish enough. And you have a guide. We had a guide. And I didn’t look at how I had to get down once I was up. So up I went.

Did I mention the guide moved like a bi-pedal Nicaraguan mountain goat?

Cerra Negro (“black hill”) erupted last in the 1990s. It spewed ash and pumice for miles – a bit like Mount St. Helens in Washington. Driving through the countryside to get to the park it was easy to think that the farmland was covered in rich, black dirt – until you realized that wasn’t dirt, that was pumice left behind by Cerra Negro. No humans died when it erupted, but plants and farm animals did. Hundreds of people had to evacuate because the surrounding area wasn’t livable. The fauna is coming back, but Cerra Negro itself remains a big black hill with virtually no trees or vegetation of any sort. The locals advise that you start climbing early – that lack of vegetation means you are clambering up a pile of black rocks in full sun. As you get closer to the top you start to get a nice breeze, but that becomes a steady wind that can blow your hat off (and threaten smaller people with toppling over). Did I mention there isn’t a true path? You just have to keep following the route of your native mountain goat guide over the rocks…Good thing he was willing to take breaks on the way up.

As you climb, and once you are at the top, the views are spectacular. It’s lush green in most every direction. The crater of the volcano has its own rust-colored beauty, but it’s not as photogenic as the next hill over. It’s good to stand at the top and recognize you just climbed a volcano. It makes a person feel accomplished. If you are my daughter, this makes you want to do cartwheels and handstands. If you are me, you fret that your child will go tumbling down the steep side of the volcano as she does handstands and cartwheels. 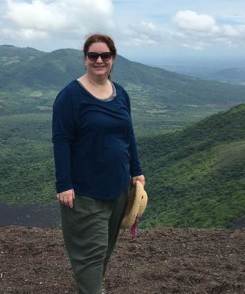 Then you need to go back down. Down is a different route. Down is down through pebble-y pumice that is a bit like deep sand (except it’s far more likely to scrape you). Down is steep, steep like a ski jump that you don’t see part of until you’re on it. Down means leaning back because if you stay upright or lean forward you will fall headfirst down 2400 feet of pumice covered volcano. The guide advised leaning back and going down at a trot. That worked well for Daughter who has no fear of heights (and actually enjoys them). I was less speedy, less graceful, and far more willing after a near panic attack to forgo dignity – scooting and crab-walking down, allowing all fours and my backside to hug the mountainside.

A fair amount of Cerra Negro arrived at the bottom with me in my pockets and shoes (I found yet more in those shoes weeks later back in Minnesota while walking around at the state fair). Up took just over an hour and a half, down took Darling Daughter about 10 minutes and me, um, more than 10 minutes. But I went up, and now I was down, And I can say I climbed a volcano on my summer vacation.

When have you done something even though you were scared?

43 thoughts on “What I Did On My Summer Vacation”