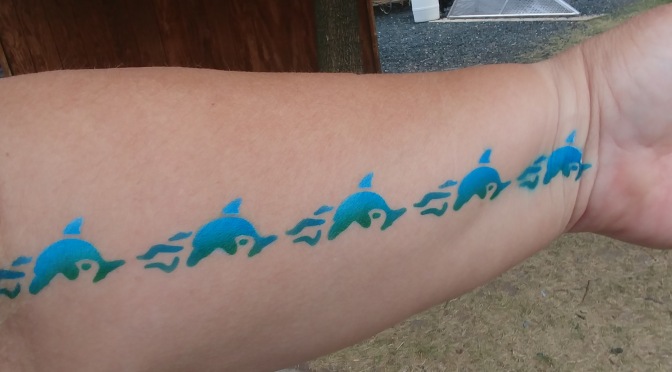 I scrubbed off all my temporary tattoos tonight. It’s official – the State Fair is over.

Most people I know don’t understand my love affair with the Great Minnesota Get Together and to be honest, it occasionally mystifies me a bit. But one of the things I do know is that I love getting temporary tattoos at the Fair.  I got nine this year over my four days of attendance –   3 from the airbrush tattoo guy, 2 from Kemps, 2 from the AG building, 1 from the lamb building and my favorite, one of the emerald ash borer.  There was a young man dressed up as an emerald ash borer at the DNR booth, trying to engage people about this new threat to ash trees and I felt sorry for him so I let him put his temporary tattoo alongside my others.

The airbrushed tattoos wear off the soonest (which is truly irritating, since they cost money) but over a week later, my free ones were still going strong. Every day last week I had to explain them at least twice a day to one or the other of my co-workers and today my book club members (my OTHER book club) wanted a full run down.  It’s been my way of extending the Fair – however tentatively.

But tonight when I was closing a couple of windows (because it’s been getting chilly at night) I realized that it’s time to let this year Fair go and start dreaming of next year.

Do you have a tattoo? If you were to get one, what would you get?

42 thoughts on “After the Ball Was Over”