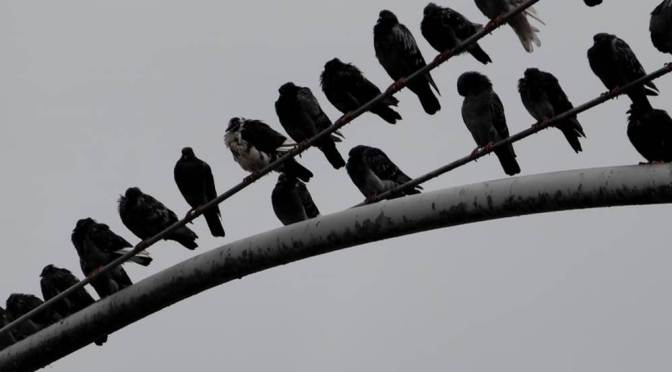 The blackbirds have arrived. Or maybe they’ve just arrived en-mass. Kelly does not like them. She will go out at 6 a.m., slapping two boards together to scare them off. To me it looks like an exercise in futility. She’s thinking if she scares them off soon enough and often enough they’ll stay away. And I’m not sure – I can’t prove it *won’t* work. But I don’t think it is working.

It’s morning, she’s just driven off to work and the trees are already filled with cackling blackbirds. I’m sure it upset her no end; she knows they are mocking her now. But I admire her determination. The barn swallows have moved on so that’s depressing as well. Tonight when she gets home, she’ll be out there cracking those boards together.

We’ve even tried firing shotguns at them. Yep, they all fly away, but then they’re right back. Like turkey or deer. Or raccoons. Or a bad fungus.

The city of Rochester has also been fighting crows roosting in trees in the downtown area. So at least we’re not fighting the messy droppings of the blackbirds, just the noise.

“What wakes you up in the morning?”