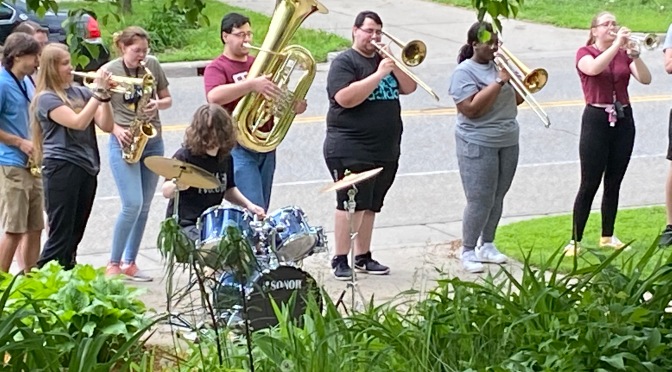 My nextdoor neighbor, Brian, is a school music teach and band director.  The last time he saw his “kids” was when they said good bye for spring break.  Then schools began to close, so they have had online classes but as you can imagine, band class isn’t quite the same and since Brian is changing schools this fall, he felt a little bad about not seeing them again.

The kids apparently felt badly as well because on Monday, the brass section, along with a drummer, showed up in the front yard and serenaded him for about 15 minutes.  It was a big surprise to Brian; the kids had set it up with his wife, Sarah.  By the end of the performance, quite an audience has gathered, on both sides of Lyndale.

I know that other entertainments and festivities are happening in people’s front yards.  A young friend of mine had a drive-by college graduation and Tuey, a juggler that I like, has also been doing his show on front sidewalks during shelter-in-place.

I think this is a great way to celebrate even while social distancing.