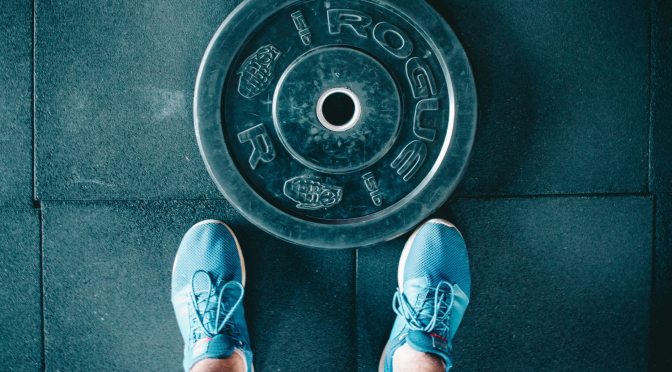 My mom (Nonny) is a jock.  She was very active as a kid and played many sports when she was in school (basketball, field hockey, tennis).  She got my dad interested in tennis after they married and they played consistently until his death.  She even played tennis the night before my baby sister was born.  Doubles and she was happy to tell everyone that they won against the other team.

So imagine Nonny’s disappointment when all three of her daughters turned out to be complete non-jocks.  I cycled fairly seriously for a couple of years (way before YA was born) and my baby sister runs occasionally, but for the most part, we are couch potatoes.  Of all seven grandchildren, only one has any spark of jock-ness: YA.  Swimming, gymnastics, running and weight training have been part of her regime over the years.

Santa brought YA a 10-pound weight, so now she has two.  I noticed a couple of days ago that she has set up a “gym” in Nonny’s room upstairs.  She has her yoga mat, her weights, a big yoga ball and some kind of exercise bands.  This morning she had music playing on her phone while she worked out.

I admire her get-up-and-go.  While I’m doing the stationary bike at the gym occasionally (translation: every 4 or 5 days) and walking the dog occasionally (translation: if the sun is shining), I wouldn’t say that exercising is my top priority these days.  If would be nice if YA’s commitment to working out would rub off on me, but I’m thinking if it hasn’t happened yet, it probably won’t.

Have you ever had a “favorite” exercise?  If you could have your own In-home gym, how would you like it set up?