I’m a Star Wars Fan.  Not a rabid fan and I have to admit that I haven’t even seen the last few movies because they haven’t come around for free yet.  But I will always remember when Star Wars IV came out in 1977.   I went to the first night it opened at The Grand Theatre in Northfield; I hadn’t heard anything about it but some other friends were going so I went along for the fun.  When the curtains pulled back and the screen filled with stars and the music blared out, I felt as if somehow my life had changed.

Night 2, Night 3 and Night 4 found me at The Grand again, each night with a different group of friends.  I was a bit like a CGI proselytizer – trying to get as many people as I knew to see and fall for the new special effects that were on the screen. By Night 5, my friends were starting to give me grief, so my streak ended. (There have been only two other movies that got the Night 1, Night 2, Night 3, Night 4 treatment – Blazing Saddles and Princess Bride. Oddly enough Blazing Saddles was also at The Grand.) 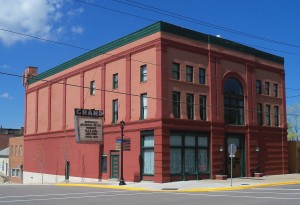 Over the years I’ve watched IV, V and VI over and over again. The others not as much. I’ve never been to a convention, although I’ve certainly thought about it. When May 4 began to be known as Star Wars Day, I noted it but didn’t go crazy over it. YA did give me a book a few years back on May 4, William Shakespeare’s Star Wars: Verily, A New Hope. Kind of my wheelhouse, right?

I do enjoy all the memes and puns that are associated with Star Wars – and there are A LOT of them. Here’s a new one I found a couple of weeks ago.

Q.  Why isn’t Leia married in A New Hope?

A.  She’s been looking for love in Alderaan places

Where is this going, you all ask? This is where it’s going. When I found the phrase “May the Horse be With Ewe” last week, I fell off my chair laughing.  Almost immediately I started thinking about making a card and ended up with the design you see above. On the inside of the card, in the Star Wars font (yes, there is such a thing), I do have “May The Horse Be With Ewe”.  I couldn’t help myself. So far a couple of folks who have received it have called and laughed with me.  I’m pretty sure that Nonny is not going to get the joke.  I’m not even sure if she has SEEN Star Wars.