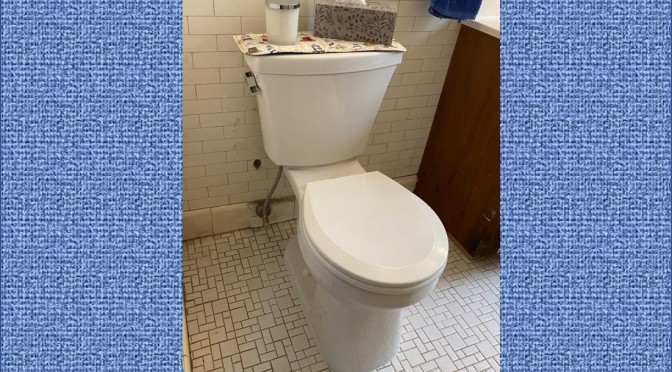 Last week I extolled calling a professional concerning my front porch.  The stucco guys weren’t the only professionals I called upon last week.

The story of my “privy” is a long one.  When I moved into my house 30 years ago, the lid on the bank had been previously broken in 2 places and glues back together….badly.   The glue had been liberally applied and the excess, which had yellowed, had not been wipe off.  It looked so awful that I always draped a towel or napkin over it.   A few years later, it got dropped and broken again, this time it couldn’t be put back together again.  Luckily YA, Child back then, found an exact replacement at Architectural Antiques downtown.

I had learned early on to changed out the tank ball; it needed to be done every year or so.  I also installed a new fill valve several years back.  So when the trip lever broke about a year ago, I figured it would be a quick fix.  Wrong.  I won’t go into the excruciating detail, suffice it to say, it went from bad to worse and we ended up having to jiggle as we flushed and then jiggling again after the ball dropped.  Sometimes twice.  I’ve probably spent 40 hours in the last year trying to adjust, replacing levers, replacing the ball.  Awful.

I was pretty sure what the plumber would tell me, but when he showed me what was contributing to my issues and talked through the repairs, I knew that I had been right to expect the worse.  He came back two days later and voila – a new throne!  It uses less water, fills faster and does its job better.  I almost wish I had replaced it years ago.  YA is reserving judgement as it’s taller than the old one.

Toilet paper – over or under?