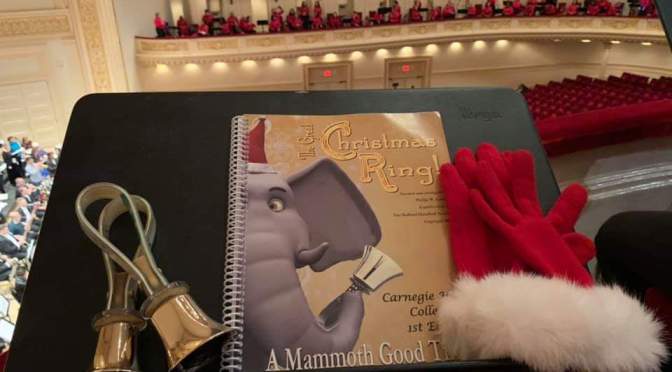 Husband and I returned last Monday from a week long trip to New York  City. We were there with four other members of our church handbell choir to participate in a massed handbell choir of 275 ringers. We were the opening act before a performance of Handel’s Messiah at Carnegie Hall.

Everything that could go right on the trip did, and there were no disasters. We slipped past three major snow storms in our travels.  All our rental bells were there as ordered, hotel reservations were good, and our names were in the program. What more could a person ask for?

In addition to the Dec. 1 Carnegie Hall gig, we had the options of playing in Central Park on Saturday afternoon, and with the Rockettes at Radio City Music Hall at various times during the weekend. Here are the players at the Naumberg Bandshell in Central Park.

The Rockettes Christmas Spectacular featured the Rockettes in numbers like “The Parade of the Wooden Soldiers”, during which the dancers collapsed on one another like dominoes. They also did a number called “Sleigh Ride” in which the dancers were featured as precision-stepping reindeer. In between the dance numbers were high tech visual effects and bell numbers. It ended with a tableau of the nativity complete with three live camels, a donkey, and a sheep. All the animals had been blessed by Cardinal Dolan at the start of the season. No unsanctioned animals in this production! I haven’t any photos. Photos were prohibited. This will give you an idea.

The Carnegie  Hall concert was really fun.  We entered the hall through the stage door, just like all performers do. There were a few ringers on stage with the conductor, and the rest of us were in the boxes on Tiers one and two on either side of the Hall.  The following photos were taken during dress rehearsal.

We played  well. The acoustics were good, but we had to be as precise as possible given how many of us there were.  Given the size of the hall, we couldn’t use our ears to make sure were were together. We had to watch the conductor as much as possible for the timing. The conductor was so excited as they used “the Bernstein podium” for him.

The Messiah performance was wonderful. The two male soloists were on loan from the Metropolitan Opera, and there were more than 300 singers in the chorus. Half of them sang from the boxes we had played in.  We had to vacate to the nosebleed seats in the balcony during the oratorio.

So many things could have gone wrong, but nothing did. We were all so grateful for this opportunity.

Tell about your best and worst vacations and trips.

61 thoughts on “Our New York Trip”